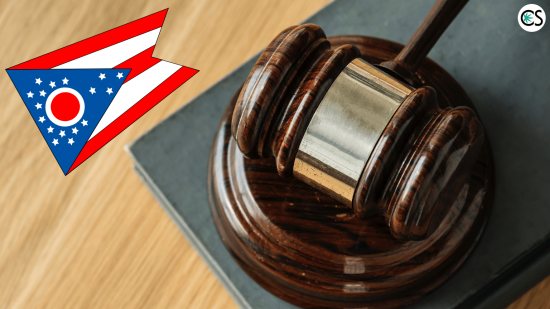 Is CBD Really Illegal in Ohio?

CBD is sold widely throughout the US, including Ohio.

But in the Buckeye State, possession of the non-psychoactive cannabinoid is considered illegal.

And it could even land you with felony charges. On September 8, Ohio’s new medical marijuana laws went into effect.

And the Ohio Pharmacy Board decided that the sale of CBD products are illegal unless they’re being sold in a medical marijuana dispensary.

The board says CBD products must go through the same testing standards and comply with the same rules as THC containing cannabis.

But CBD isn’t psychoactive and if it’s hemp derived should be exempt from being considered a controlled substance — so why all the fuss?

The DEA has kept CBD on the list of Schedule I Substances, the most dangerous and habit-forming of the bunch according to the federal government.

Officials in Ohio have taken the stance that since cannabis and cannabis extracts (including CBD) are illegal under federal law, that they will enforce these laws to the fullest extent.

The federal status of hemp derived CBD remains in a gray area until the official and soon expected passing of the Hemp Farming Act.

Robert Faulkner found this out firsthand when he was arrested in Richland County for possession of CBD oil.

Given two counts of aggravated possession of drugs, Faulkner is currently awaiting a grand jury trial for these felony charges.

He is also on an ankle monitor and must regularly check in with probation. All for trying CBD oil to help with his anxiety.

“I didn’t knowingly obtain anything illegal,” Faulkner told Cleveland 19 News. “I went to a store to try to help me with an issue I have.”

There are three Hemptations locations in Ohio, a popular store selling “the largest selection of legal industrial hemp on the planet”…including CBD. Hemptations Sharonville location owner E.R. Beach says the legality (or lack there of it) of CBD is “frustrating.”

“Other places are listening to them and pulling their products from their shelves and the only person who’s being hurt there is the customer,” says Beach. “There’s no euphoric value to it, you could drink a whole bottle of the strongest CBD oil we have and it’s not going to give you a buzz.”

The Ohio State Pharmacy Board says they’re not enforcing anything just yet.

They contend they just want to let businesses be aware of the ruling.

For now, the only Ohio residents permitted to legally obtain CBD oil are those with a valid medical marijuana card.

From what we understand, people in Ohio are still purchasing hemp derived CBD oil both online and from retailers who still carry CBD oils and products.

Hopefully Ohio law makers will come to understand that CBD hemp oil is a non-marijuana derived product with the potential to provide relief and benefits to many of its residents.

As always, we’ll keep you posted.