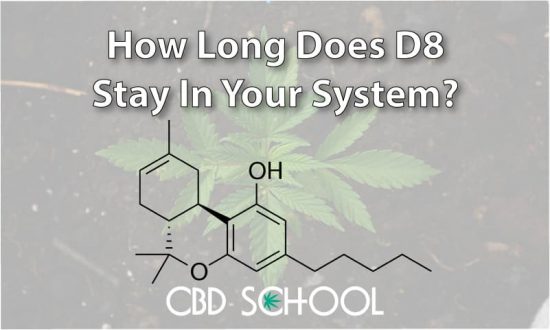 How Long Does Delta 8 Stay in Your System?

So, how long does Delta 8 stay in your system? This is a question that many people are asking, and the answer may surprise you. As with most substances we ingest, the answer depends on several factors. Let’s discuss some basic facts about Delta 8 can help guide you understand more about why it stays in your body for so long.

In general, Delta 8 remains in the body for between 2 and 30 days after use, but this can vary according to how often and in what manner Delta 8 is used by the individual.

Delta-8 is one of the most well-known cannabinoids on the market. It and its brother Delta-9 compound are similar. If Delta 8 has less than 0.3 percent Delta-9, it is legal under the 2018 Farm Bill. Delta-8 is a less powerful and more stable variant of Delta-9 THC. It’s made from hemp, but it doesn’t have the same psychoactive substance effects as Delta-9.

In the hemp business, Delta 8 is the most frequently consumed cannabinoid. This is because it enhances your attention and clarity rather than increasing it instead of Delta-9 THC.

In addition, consumers claim that they do not experience any anxiousness and paranoia when they consume the super-cannabinoid.

Delta 8 is chemically similar to Delta-9 THC. However, its psychoactive effects are somewhat weaker. It has developed a whole new high-like experience through contemporary science. Delta 8’s effects are comparable to Delta-9 THC but less intense. It’s ideal for people who don’t want a strong high.

Delta 8 is broken down very slowly in the body, resulting in a significant amount of time spent in your system when using it. In addition, Delta 8 is highly metabolized, and frequent usage along with the product concentration and ingestion technique affects how long it stays in your system.

Is Delta 8 Legal and Safe?

The safety of Delta 8 products is somewhat uncertain, as is the case with all other CBD products. In addition, Delta-8 THC’s production is less regulated than cannabis.

The process takes place in concealed environments, and the product contains manufactured chemicals that cause a psychoactive effect and produce numerous side effects on consumers.

In certain states, the marketing and legalizing of chemically produced delta-8 and delta-9 drugs is prohibited. The general public is naturally concerned about these chemicals, and there have been numerous consumer complaints to the FDA. Most of all, due to the growing number of unusual calls to poison control centers regarding the hazardous consequences discovered in the mentioned items.

The FDA has received several cases linked to Delta-8 ingestion, in which consumers experienced hallucinations, fainted, and vomited after consuming delta-8 drug products.

Delta-8 is thus beneficial to consumers’ health, but dangers and other factors are also connected with its use.

What Are the Benefits and Effects of Delta 8

There is a lot of positive consumer feedback regarding Delta-8 health benefits. People who use it claim that it helps calm their nerves when they are nauseated, boost their appetite and mental health, and assist with the effectiveness of anti-depressant drugs.

It interacts with the endocannabinoid system in a similar manner to Delta 9 THC, which means that you will likely get a lot of the same effects, but not for as long as Delta 9 THC.

Users also claimed that delta-8 aids in their health problems, such as providing relaxation to users and reducing anxiety felt by cancer patients undergoing treatment, who frequently experience nausea.

Another advantage of taking the delta-8 is that it may offer a similar euphoria and pain relief as delta-9. It, nevertheless, has a lower strength, which makes it more pleasant.

Delta-9, on the other hand, has adverse side effects when taken. After a time, users become confused, drowsy, numbness sets in, their blood pressure drops significantly, and they have a variety of heart symptoms, including slow or fast heart rate.

How Long Do the Effects of Delta 8 Last?

The intoxicating effects of cannabis can last anywhere from two to eight hours. Therefore, it lasts longer than other drugs, although the duration varies depending on the type of product you used, your tolerance for THC, and your metabolism.

It leaves your system within a few hours. However, the cannabinoid usually stays in your body for a few days because it must break down the cannabinoid present in the circulation – and store it in fat and organs – after it has been absorbed.

Will Delta 8 THC Show Up On a Drug Test?

Delta 8 is a potent yet smooth cannabinoid that was designated one of the most anticipated cannabinoids to hit the market in 2021. If you use it regularly, it’s crucial to know how long it stays in your body and if it affects an upcoming drug test, because delta 8 will show up on a drug test.

The fact is that a delta 8 drug test failure is possible. A drug test depends on many criteria, but It’s very probable to find this stuff on a urine or blood exam as long as it’s present in the body.

Delta 8 is federally legal in the United States and has been for many years. However, it’s difficult for standard drug tests to tell the difference between delta 8 THC and delta 9 THC, which is illegal in most states, and most drug tests can detect THC, including a hair follicle test, blood tests, and saliva tests can.

Delta 8 THC has a half-life of 6 to 36 hours, depending on several factors. Delta 8 THC is eliminated from the body at different rates based on how frequently you use it. Other cannabinoids, including CBD, have the same effect.

Cannabinoids are fat-soluble. Therefore they may enter the body’s fatty cells. When we consume cannabinoids in large doses or for lengthy periods, they accumulate in our body fat.

When we stop using, cannabinoids accumulations slowly start to flow back into the bloodstream — prolonging the amount of time needed for these compounds to be eliminated from the body.

People who are occasional users of Delta 8 once or twice each week will be completely free of the chemical in around seven days. If someone uses Delta 8 several times a week or more, it may take a few weeks to be eliminated from the blood or urine. If you have a drug test coming up for any reason, it’s wise to avoid using delta 8 THC.

Urine Test: A drug test might be conducted by testing the urinal sample of a patient. Urine tests are usually more sensitive than hair tests and can reveal drugs used over a longer duration.

For example, a urine test will show Delta 8 THC 72 hours or 30 days before the exam if you ingest it within 72 hours or 30 days. This is why employers of many businesses use it to detect THC metabolites and identify regular drug users.

Saliva Test: This test will show usage within 24 hours or a week after taking this drug. If you get a Saliva test and you’ve used Delta 8 to 10 days or more before the exam, you’ll pass it.

Blood Test: The most efficient approach to detect long-term usage of 3 hours to 3 months before the test is blood testing. It’s a broad and most frequent drug testing procedure.

Hair Follicle Tests: To pass the test, it is crucial to stay away from Delta 8 for at least three days. If you use this drug just one day before an exam, you’ll fail the test.

How to Pass a Drug Test For Delta 8 THC

There are methods to eliminate it from your system in time for an impending drug test. However, even if you don’t have an upcoming test but want to cleanse your system to maintain optimum health, here are some suggestions:

Your body will eliminate the metabolites if you follow the instructions above.

How Long Do Delta 8 Gummies Stay In Your System?

The duration of your drug’s effect will last around 8 hours, but the period it takes to enter your system is different.

The system maintains the product for a different length of time. For example, testers can still detect the drug in your saliva for up to 48 hours after taking the product.

Because it is based on variables like the amount of delta-8 THC consumption and one’s metabolism, people dependent on this drug will be recognized and fail even a generic drug test since the effects last for one to two months.

Summary – How Long Will Delta 8 Remain in Your Body?

If you’re wondering how long delta 8 stays in your system, it’s essential to know that drug tests work, and this chemical will be detectable by blood, hair follicle, saliva, or a urine test. Unfortunately, depending on the drug screen being used, delta 8 THC can be difficult for some people to detect because they are not screening for this specific compound.

When taken orally, most drugs will pass through one’s system within three days, but when injected intravenously with an opioid solution, it may take up to 7-10 days before someone would no longer have any trace of the drug in their body. Expect residual traces of delta 8 to remain detectable for up to four weeks.