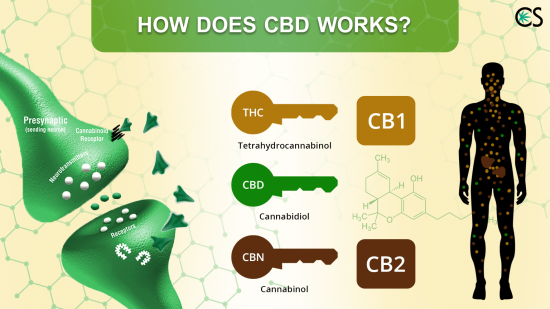 How Does CBD Work?

How Does CBD Work?

Understanding how CBD works can be overwhelming.

There’s tons of medical jargon to wade through and many different receptors/neurotransmitters to try to keep in your head.

After a while it all starts to sound the same and stops making much sense.

Then there’s the endocannabinoid system.

You’re tasked to remember the cannabinoid receptors, the endocannabinoids, and how the whole system functions. And then there’s CBD itself. But don’t worry. We’ll explain to you how CBD works the quick and easy way.

Read: What is CBD (Cannabidiol)? The second most-recognized and studied cannabinoid from the cannabis plant is cannabidiol or CBD. Why CBD became a fast favorite of researchers, scientists, physicians, and people like you and me is easy to understand. After all, CBD has many of the same medicinal properties as THC, but without the psychoactivity. CBD doesn’t get you high, at least not in the traditional sense that’s associated with using marijuana.

How does CBD work?

The endocannabinoid system’s most important function is to maintain balance and homeostasis of almost everything going on in your body. This system is made up of the CB1 and CB2 receptors, and these receptors are activated by anandamide and 2-Arachidonoylglycerol. Anandamide stimulates the CB1 receptors; while 2-AG stimulates both the CB1 and CB2 receptors. CB1 activation controls several physiological functions like sleeping, appetite, vomiting, mood, pain perception, and memory; CB2 activation controls inflammation since these receptors are predominantly found in the immune system. Now, THC binds to the CB1 receptors. This is how THC produces its therapeutic effects. It is also how THC produces its euphoric, psychoactive effects. CBD, unlike THC, has a low binding affinity with the cannabinoid receptors. This means that CBD cannot directly activate these receptors to produce the therapeutic effects of THC, anandamide, or 2-AG. Instead, CBD binds to different receptors and activates them to produce its therapeutic effects. CBD has the ability to influence ion channels that control the release of chemicals like calcium, sodium, and potassium. This ability of CBD is very important because it plays a role in controlling seizures. CBD also has the ability of delaying the reabsorption of important neurotransmitters or brain chemicals. As a result, CBD gives these chemicals more time to stay in your body so their effects can last longer.

What are the effects of CBD?

Read: Using CBD for Chronic Pain  CBD has the ability to control not only acute pain, but chronic and intractable pain as well. It can even control neuropathic pain — a type of pain which is poorly controlled with traditional painkillers like opioids. Imagine applying a dab of capsaicin over your sore muscles. The immediate effect you feel is a painful, burning sensation, right? But after a while, you should notice that desensitization occurs. You no longer feel pain, but just a pleasant numbness. That is how CBD helps with pain. It stimulates the vanilloid receptors so desensitization occurs faster. CBD makes these receptors numb to pain. CBD helps anandamide stay longer in the body[iii] by hitching a ride with anadamide’s transport protein called fatty acid-binding protein or FABP. The FABP is what “delivers” anandamide to the enzyme that degrades it, and what CBD does is actively compete with anandamide in binding to the FABP. With fewer FABP to bind to, anandamide gets to stay in your body longer without being broken down! Basically, CBD gets in the way of the typical course taken by anadamide — and we get to benefit from it. Go anandamide! And thank you, CBD! CBD stimulates these receptors, enhances their effects, and produces relief from pain[iv]. So, what are the medical conditions CBD may help? CBD has the potential to help improve painful medical conditions like:

CBD is a muscle relaxant and has the ability to decrease muscle spasms and reduce spasticity – a condition in which muscles are continuously contracted. CBD does this by enhancing anandamide levels. Now CBD, working together with THC, seems to be the best combination to produce antispasmodic effects. THC stimulates the CB1 receptors, and CBD works to reduce the psychoactive effects of THC. CBD has the potential to reduce spasms and spasticity in the following medical conditions: The Wolfson Medical Center in Israel is also working on a study on THC and CBD and their effects on spasticity associated with cerebral palsy, dystonia, and neurodegenerative diseases.

CBD Has Anticonvulsant and Anti-Epileptic Effects

Read: Can THC and CBD Really Help with Nausea and Vomiting? Nausea and vomiting are nasty symptoms of many medical conditions affecting the digestive system. Nausea and vomiting are also some of the worst side effects cancer patients have to deal with when going through chemotherapy. CBD can reduce these symptoms through a number of ways: CBD stimulates the dorsal raphe nucleus to produce its anti-nausea and anti-vomiting effects by decreasing its release of serotonin. The powerful effects of CBD can help reduce nausea and vomiting symptoms caused by:

CBD also has antidiarrheal effects since it can help slow down intestinal motility — the movements of your digestive system. And CBD has the ability to enhance anandamide’s functions by allowing it to stay longer in the body. Seeing a pattern yet? 🙂 CBD has demonstrated the ability to inhibit the action of acetylcholine and reduce intestinal motility. CBD’s antidiarrheal effects can benefit medical conditions such as:

CBD Has Anti-anxiety and Antidepressant Effects

Read: How to Use CBD for Anxiety CBD, compared to THC, does not produce anxiety. In fact, CBD can help decrease anxiety, depression, and panic attacks. Stimulating this receptor also helps improve sleep. Of course, we all know by now that CBD has the ability to let anandamide stay longer in your system by preventing its transport protein from carrying anandamide to the enzyme that degrades it. High levels of dopamine (the feel good neurotransmitter) and glutamate (an excitatory neurotransmitter) in the brain also increase anxiety and stress. Now, adenosine receptors have the ability to modulate the release of these neurotransmitters, and when CBD binds to the adenosine receptors, it tells the receptor to slow down its release of these neurotransmitters. By activating the adenosine receptors, anxiety is reduced. With these effects, CBD may help improve the following medical conditions: CBD, as seen in a study done on mice, even has the potential to help patients suffering from obsessive-compulsive behaviors and autism.

CBD also has the ability to control psychosis. CBD produces its antipsychotic effects by allowing anandamide to stay longer in the system and produce its therapeutic effects. Are you sick of hearing about anandamide yet…well sorry! This endocannabinoid is a superstar 🙂 Psychotic conditions that CBD has the ability to help include:

CBD May Have Anti-tumor and Anti-Cancer Effects

CBD has the potential to treat cancer. CBD may prevent cancer from growing, spreading, and infiltrating healthy tissues. CBD also possibly has the ability to prevent the formation of blood vessels that supply the cancer with what it needs to grow. CBD also inhibits the action of some of the molecules that signal the start of angiogenesis. Now CBD has the ability to influence and down-regulate gene expression. This CBD effect can inhibit the migratory abilities of cancer cells. While more conclusive research is needed, CBD has shown the potential to help with the following cancers:

Read: CBD’s Remarkable Effects on Inflammation Inflammation, although it is protective and needed in the healing process, can sometimes worsen many medical conditions. Instead of helping, inflammation becomes even more harmful. It’s one of the factors why medical conditions become chronic, why pain becomes intractable, and why so many diseases can become very difficult to treat. CBD has anti-inflammatory effects, and it controls inflammation through a number of ways:

So, what are the medical conditions worsened by inflammation that CBD has the potential to help?

These are just some of the medical conditions made worse by inflammation though; there are a whole lot more!

Though the mechanism of action by which CBD kills bacteria is still unclear, studies have shown that CBD has potent antibacterial properties and can help in the treatment of methicillin-resistant Staphylococcus aureus (MRSA).

CBD is a very powerful antioxidant that can help prevent brain neurotoxicity.

It’s almost as strong as butylhydroxytoluene or BHT (another powerful antioxidant), but unlike BHT, CBD does not trigger tumor-promoting effects.

This antioxidant effect of CBD is very important because the accumulation of free radicals can worsen so many diseases like senile dementia, skin cancer, atherosclerosis, diabetes, and cancer.

CBD has the ability to reduce addiction by acting on the different pathways involved in substance dependence and drug-seeking behavior.

One particularly interesting study on CBD and addiction was done on cigarette smokers.

Smokers were given inhalers with CBD and inhalers without CBD. They were instructed to use the inhaler whenever they had a craving for a cigarette.

Throughout the multi-day study, participants were allowed to smoke cigarettes.

How does CBD work to control the effects of THC?

I’ve mentioned above that CBD can enhance the effects of THC and, at the same time, control its psychoactive effects.

CBD does this in two ways:

With these effects, CBD can tone down the typical high you get with THC!

This does not mean you won’t get high at all if you use a CBD product with high amounts of THC.

If you are not a regular cannabis user, you will likely experience psychoactive effects.

But CBD has shown to tone down some of the negative effects associated with THC like paranoia, anxiety, increased heart rate, and other negative psychological reactions.

It can’t be denied that CBD has many therapeutic effects.

Those listed above are just some of the effects of CBD!

CBD, like any other drug, also has some possible side effects like lightheadedness, drowsiness, and upset stomach or diarrhea.

But these effects are mild, and they’re typically well-tolerated by people who are taking CBD.

It can produce its widespread therapeutic effects without producing any motor, mood, cognition, and behavior changes.

It won’t even affect your blood pressure or pulse rate.

CBD is considered safe to use — this has been demonstrated in high doses.

There is no risk of serious consequences of taking too much CBD (fatal overdose) because there are no cannabinoid receptors in parts of the body responsible for controlling heart rate and breathing.

Compare that to opioid painkillers which cause multiple overdose deaths every single day.

How do you use CBD?

Hundreds of studies have demonstrated that CBD can improve many medical conditions.

If you’re thinking of adding CBD to your medication regimen, please consult with your doctor first.

He can refer you to licensed cannabis doctors who will evaluate your medical condition and work with you in creating a CBD regimen best suited for your needs.

Because of the safety profile of CBD, you may want to experiment on your own.

That’s fine – especially if you are not taking any other medications, so you don’t have to worry about drug interactions with CBD.

If you are already taking medication, do not use CBD without speaking to your doctor or pharmacist first as drug interactions are possible.

If you are new to CBD, start low and go slow. A common dose people like to start with is 5 – 10 mg of CBD a couple times a day.

Try this for about a week and see if it improves your condition.

If not, increase your dose slowly until you reach the sweet spot where your condition improves.

Once you hit the sweet spot, you don’t need to increase the dosage. You can stay at this dose and use CBD daily or as needed for your condition.

CBD is new. We still have a lot to learn about this extremely versatile cannabinoid.

As time goes on and CBD use becomes more standardized, we will have a clearer picture of the best doses for specific conditions.

The future is bright for CBD.