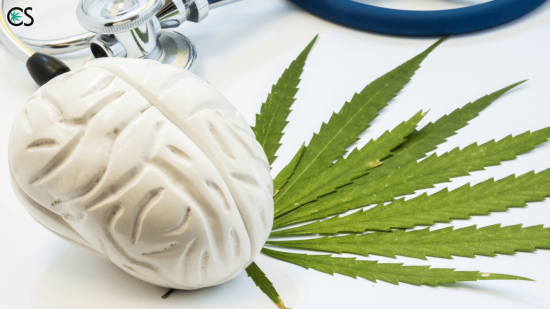 Most studies on CBD are either done on animal models or human cells (in vitro).

These studies have provided us with excellent insight to how CBD works.

They were also able to prove CBD’s efficacy against several diseases, especially some of the diseases that don’t respond well to conventional treatment.

But we have to admit that CBD studies done on humans are lacking. We need more studies on humans in order to bring CBD into widespread use.

Federal restrictions have made it difficult for researchers to conduct human clinical trials on CBD. But not impossible.

Summarized below are some of the most interesting CBD studies done on living human patients.

We go over the effects CBD has had on their medical conditions as well as the impact of CBD on their overall wellbeing.

Epilepsy disorders are treated with strong medications to control the seizures.

Unfortunately, there are some types of epilepsy disorders like Dravet syndrome that don’t respond well to conventional antiepileptic drugs (intractable epilepsy).

Patients are left suffering from hundreds of seizures weekly. This impacts not only their physical development, but mental and emotional wellbeing as well.

In a study called “Trial of Cannabidiol for Drug-Resistant Seizures in the Dravet Syndrome” it was demonstrated that CBD is effective for intractable epilepsy which was not responding well to conventional antiepileptic drugs.

The study involved 120 children with the Dravet syndrome, a type of intractable and drug-resistant epilepsy that has a high mortality rate.

In addition to their regular antiepileptic medications, the children were also given CBD oral solution, while some were given the placebo.

The results were amazing!

Children who were on CBD experienced a significant reduction in their seizure frequency, compared to those who were given the placebo.

There are lots of anecdotal stories that prove CBD’s effects on epilepsy.

The story of Charlotte Figi, as seen in Gupta’s WEED documentary, captured the hearts of many people around the world.

Another famous account on using CBD for epilepsy is Haleigh’s story. Haleigh was suffering from severe epilepsy and cerebral palsy.

Her condition failed to respond to conventional antiepileptic drugs. When her parents learned of CBD’s effects on epilepsy, they wanted to try the medicine for their child.

Braving everything, the family moved to Colorado to give their daughter a chance at life.

Haleigh was given a high-CBD and low-THC dose, and this combination was able to help control her seizures.

Indeed, her story gives hope to thousands of families who have epileptic children!

Using CBD for epilepsy is a serious matter. Epilepsy can be life threatening and drug interactions with CBD are possible.

Always consult with a physician before using CBD for epilepsy, especially when the patient is a child.

CBD May Help With Cancer Pain

Cancer is a deadly disease that affects millions of Americans.

Though cancer can be treated with conventional anticancer treatments like surgery, chemotherapy, and radiation, sometimes cancer comes back post-treatment.

Chemotherapy kills cancer cells, but most patients undergoing this treatment develop adverse side effects like nausea, vomiting, weight loss, and cancer pain, which can’t always be controlled by conventional drugs.

There are two studies that I want to share: both of these studies were able to show that CBD can help with cancer symptoms.

A study on CBD and cancer pain called “Multicenter, double-blind, randomized, placebo-controlled, parallel-group study of the efficacy, safety, and tolerability of THC:CBD extract and THC extract in patients with intractable cancer-related pain” showed that CBD can control cancer pain.

This study used CBD and THC combination therapy on 177 patients with cancer and cancer pain.

Although the participants were already receiving opioid therapy, this wasn’t enough to control their pain symptoms.

Those patients who also received a combination CBD/THC dose showed the most improvement in their pain scale.

The other study I want to mention is how CBD can effectively help with nausea and vomiting caused by chemotherapy.

This study is called “Preliminary efficacy and safety of an oromucosal standardized cannabis extract in chemotherapy-induced nausea and vomiting.”

16 chemotherapy patients with nausea and vomiting not relieved by conventional antiemetic therapy participated in this study.

The patients who received CBD/THC therapy experienced better control in their nausea and vomiting symptoms, compared to those who received placebo.

The cannabis combination also offered protection from delayed chemotherapy-induced nausea and vomiting and was well-tolerated by the patients.

This reminded me of a story I read in Dr. Bonni Goldstein’s book, Cannabis Revealed.

Alexander had had chemotherapy and numerous surgeries to remove his tumors.

His doctors also placed him on several drugs to control his nausea, vomiting, and cancer pain.

Unfortunately, all these did little to help his medical condition. His cancer came back, and now with metastasis to the lungs.

His parents were told the bad news: their son only had a few months to live.

In the hopes that medical cannabis could help their son, his parents approached Dr. Goldstein.

Along with his chemotherapy, she placed him on high, equal ratio CBD/THC treatment.

After three days, his symptoms began to improve. And after three months, his scans showed that he was cancer-free.

During his cannabis treatment, his conventional painkiller dosages were even reduced because the CBD-THC therapy was effectively controlling his cancer pain.

His appetite also improved and he gained back some of the weight he had lost!

For symptoms of pain and nausea, CBD has shown to work best in combination with THC.

This combination will not be an option for everyone for various reasons. In that case, people can use just CBD.

Always consult a doctor before adding CBD or THC to your medication regimen. 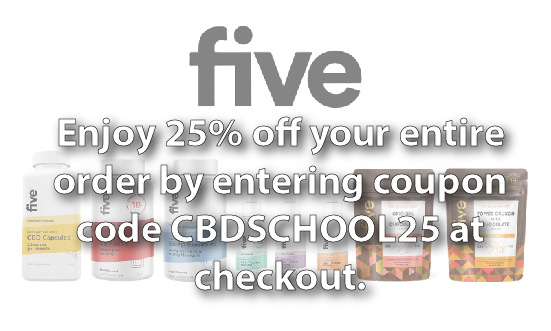 Read: How to Use CBD for Anxiety

It’s infuriating when someone says “snap out of it” to people suffering from extreme anxiety and stress.

They don’t understand that this mental condition is sometimes caused by an abnormality in neurotransmitter levels.

They think that people suffering from anxiety disorders are just overreacting to normal situations.

But they aren’t. They can’t control how their mind responds to stress because, inside their brain, there is an imbalance that makes it difficult for them to process normal stressful conditions.

CBD can control this imbalance, and it has been shown in a study called “Cannabidiol reduces the anxiety induced by simulated public speaking in treatment-naïve social phobia patients.”

Half of them were placed on CBD treatment, the other on placebo.

Those who received CBD were able to feel more calm and relaxed prior to their simulation public speaking test.

CBD was able to help calm them down and reduce their stress and anxiety levels!

CBD is an effective treatment against stress and anxiety.

It can even help patients suffering from post-traumatic stress disorder as proven by Ben Nichol’s story.

Ben has suffered from crippling PTSD symptoms since he was nine years old.

Along with his medical condition, he also suffers from attention deficit disorder and other symptoms like insomnia, restlessness, and inability to concentrate.

When he was placed on medical cannabis therapy, he experienced significant improvement in his symptoms.

It calmed him down, slowed down his very active thought process, reduced his stress and anxiety levels, and improved his sleep.

On medical cannabis treatment, Ben was able to concentrate more on his tasks.

It worsens as the disease progresses making it nearly impossible for the patient to function properly.

It even affects the mental health of the patient, causing mood swings, depression, and memory problems.

I want to share with you one study called “Oromucosal delta9-tetrahydrocannabinol/cannabidiol for neuropathic pain associated with multiple sclerosis: an uncontrolled, open-label, 2-year extension trial.”

This study was able to prove that CBD, in combination with THC, can control multiple sclerosis symptoms.

The study involved 66 patients. They were divided into two groups – one received CBD/THC treatment and the other received placebo.

Those who received CBD/THC therapy reported an overall improvement in their multiple sclerosis symptoms, including neuropathic pain.

Neuropathic pain is not well treated with typical pain killers like opioids.

The effective treatment of neuropathic pain is one of most exciting developments in cannabinoid research.

This reminds me of a story I read about a patient suffering from multiple sclerosis.

Jabe Couch used to lead a very active lifestyle, but his multiple sclerosis soon put a stop to things he enjoyed the most.

He was placed on numerous drugs to control all his multiple sclerosis symptoms.

Unfortunately, they weren’t able to fully control them. The drugs also gave him adverse side effects!

Jabe soon fell into a deep depression with suicidal thoughts.

His wife was so concerned for his safety that she always made sure there were no weapons inside their home.

He was against medical cannabis at first, but a friend letting him smoke a joint changed his mind because the effects were immediate.

He felt tremendous improvement, like a weight had been lifted off of him.

He weaned himself off most of his conventional medications except for one.

He uses high-CBD dosage to boost his energy and control fatigue, and he uses indica strain for his sleep problems. 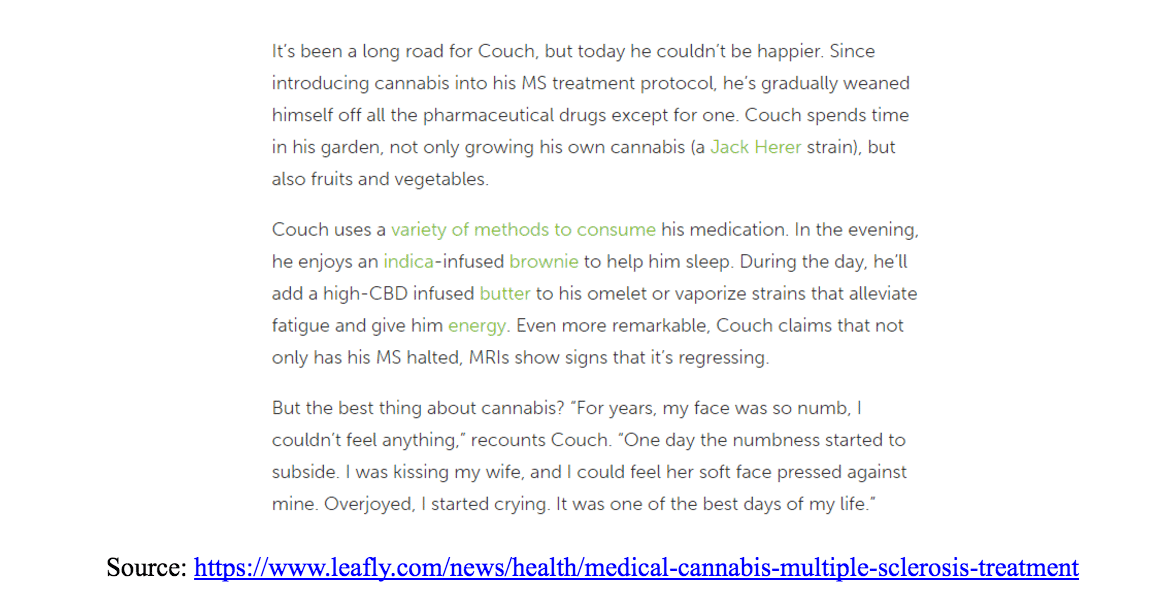 These are just some of the most interesting CBD and human studies. There are plenty more that are also worth looking into.

These human clinical trials and anecdotal stories, however limited in number they may be, all showed very promising results.

It won’t be long before people’s demand for medical cannabis forces our legislators to improve cannabis’s legal situation.

And when that happens, we will see more human clinical trials. We will gain a better understanding of CBD’s effects on live, human patients.

Most importantly, people suffering from various medical conditions like chronic pain and epilepsy will have a chance for a better life.